How can we achieve a more natural movement of robots? Find it out in this week’s Helmholtz AI project showcase, where scientists from the German Aerospace Center (DLR) and the Karlsruhe Institute of Technology (KIT) are trying to solve this question using machine learning.

Hello, I am Dr. rer. nat. Freek Stulp and a robotics researcher at the German Aerospace Center (DLR). My main research interest lies in enabling robots to dexterously manipulate objects. Inspired by the capabilities of the human hand, my work focuses on developing the multi-disciplinary algorithms, which are essential for robotic manipulation, including perception, control and learning, and integrating them into a common software framework. Together with researchers from the Karlsruhe Institute of Technology (KIT), I am working on the ‘LearnGraspPhases’ project, which aims at enabling smooth movements in robots.

The main objective of LearnGraspPhases is to use machine learning to achieve seamless and natural motion in grasping, without sacrificing the desirable modular nature of individual robotic skills. Such natural movement will be essential for safe, intuitive human-robot interaction. LearnGraspPhases’ ambition is to provide a framework that is general enough to deal with a wide variety of skill implementations, and that is agnostic about the specific robot to which the framework is applied.

The Helmholtz AI platform has been essential in facilitating the cooperation between the two project partners, DLR and KIT, in the area of robotics and machine intelligence, with the aim of increasing the scale of this cooperation through further funding opportunities. In order to demonstrate the generality of the proposed framework, LearnGraspPhases will measure its impact on two of the most advanced humanoid robotic systems, David of the DLR, and ARMAR-6 of the KIT. 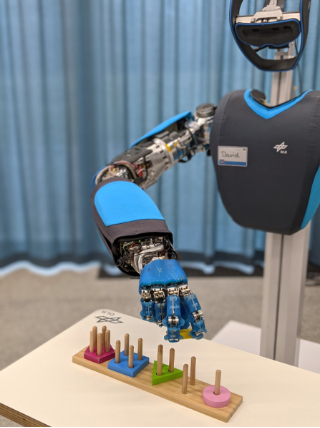 Figure: A robot works on a simple game of putting objects in the right place. Typically, the transitions between the different phases of a robotic manipulation task are obvious, with abrupt, jerky movements and pauses between them. LearnGraspPhases aims at achieving seamless and natural movements in robots.