Plankton observations underwater have a few peculiarities that make them quite a challenge. Scientists struggle to get sharp images for example due to the distance to the sample or different objects of interest at different depths. Traditional microscopy techniques can’t adapt to all these variables. But the next generation of AI-assisted microscopy can.

How can AI overcome current imaging limitations in marine biology? Read in this week’s Helmholtz AI project showcase how researchers at the Helmholtz Centre for Ocean Research Kiel (GEOMAR) and Helmholtz Munich are working jointly on this challenge.

My name is Jan Taucher, I’m a researcher in marine biology at GEOMAR. I’m mostly working on the role of plankton in marine food webs and the carbon cycle in the ocean. With this purpose I’m also developing and using novel underwater microscope systems for in situ plankton observations.

For the SuperPI project, my team is collaborating with Tingying Peng, head of the  Helmholtz Young Investigator Group at Helmholtz Munich. She works in medical imaging, on the development of new artificial intelligence methods for improved analysis of microscopic images.

In our project “SuperPI - Deep-learning empowered super-resolution plankton imaging”, we have joined forces with the aim to create a better microscopy system that can help us both in our respective fields. SuperPI started in 1/2022 thanks to Helmholtz AI funding. .

The depth of field (DOF) is the distance between the nearest and the furthest objects that are in acceptably sharp focus in an image captured with a camera. Standard optical techniques for microscopy usually are limited to a small depth of field, meaning they can only sharply capture items that are on very similar layers of depth. This restricts imaging capabilities for thick samples.

EDOF systems aim to capture microscopic images of samples at much greater depth range than standard microscopes while maintaining high image quality. This can be achieved through different methods, but we focus on one of them that has already been developed specifically for underwater plankton observations. It is called single-shot EDOF system. This system can increase the depth-of-field of the microscopic system (up to 50-fold larger DOF) but, just like “there is no free lunch”, it also degrades the optical resolution and contrast of the system, given an image naturally blurred. This happens because this EDOF integrates information not only from the in-focus “slice” of  depth, but also a large number of out-of-focus image slices.

The major goal of SuperPI is to develop novel AI methods to improve the image resolution and achieve “high-resolution, large-DOF” images. Our plan to combine imaging physics with deep-learning reconstruction for an optical system using novel technology that is not even fully physically characterized yet. The project is certainly ambitious – but it will also help to increase the general applicability of EDOF imaging for other scientific purposes, thereby pushing the boundaries of optical microscopy. 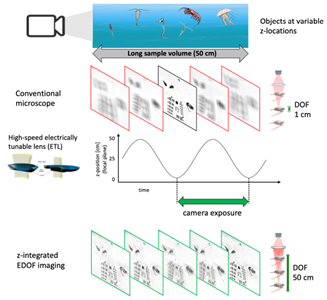 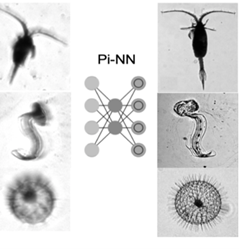 Figure: Illustration of the EDOF imaging method (left). Single-shot EDOF images are acquired by using a high-speed varifocal lens and scanning the focal plan through an extended sample volume during a single exposure. Thereby, image information with constant image properties can be collected over a DOF up to 50-fold larger than with conventional microscopic systems. SuperPI aims at developing AI-based methods to restore image information that is lost due to the EDOF method, e.g. with physic-inspired neural networks (Pi-NN) (right). This will greatly enhance the optical resolution and unlock the full potential of EDOF imaging in microsopy (“high-resolution large-DOF imaging”).

Developing new methodologies is highly important to advance research, but it is usually very difficult to get funding. The Helmholtz AI platform provided us with the unique opportunity to conduct such an interdisciplinary project.