Sugandha Doda, a PhD student at TUM and DLR, has won the 1st best poster prize at the Helmholtz AI conference 2022.

Obtaining a dynamic population distribution is key to many decision-making processes such as urban planning, disaster management and most importantly helping the government to better allocate socio-technical supply. For the aspiration of these objectives, good population data is essential. The traditional method of collecting population data through census is expensive and tedious. In recent years, machine learning methods have been developed to estimate the population distribution. Most of the methods use data sets that are either developed on a small scale or not publicly available yet. Thus, the development and evaluation of the new methods become challenging. Sugandha Doda tries to fill this gap by providing a comprehensive data set for population estimation in 98 European cities.

To advance the use of machine learning (ML) and artificial intelligence (AI) Sugandha from TUM/DLR showed her poster entitled “SO2SAT POP – a curated benchmark data set for population estimation from space on a continental scale” during the poster session at the Helmholtz AI conference from June 2-3, 2022 at Maritim Hotel & Internationales Congress Center Dresden. 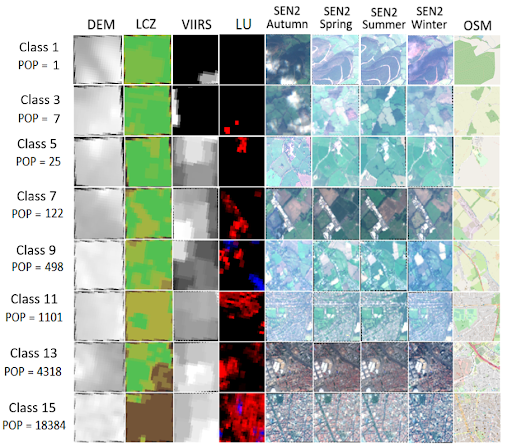 Figure: Different designs and population densities presented by Sugandha Doda in her poster.

In the poster, she introduced a systematic multi-input source data set for the population estimation in 98 European cities. It represents a wide range of topography, demography, and architectural designs across the countries. The data set comprises digital elevation models (DEM), local climate zone (LCZ), land use classifications (LU) and nighttime lights (VIIRS) in combination with multi-spectral Sentinel-2 imagery (SEN2), and data from the Open Street Map initiative (OSM). She expects that it will be a valuable addition to the research community for developing sophisticated approaches in the field of population estimation.

Over 70 posters were presented to the jury consisting of Xiaoxiang Zhu (DLR), Richard Bamler (DLR), Timo Dickscheid (FZJ), Guido Juckeland (HZDR) and Fabian Theis (Helmholtz Munich) from the Helmholtz AI steering board. Sugandha won the 1st prize for her poster and received an AI enabled Graphics Card sponsored by Sysgen. 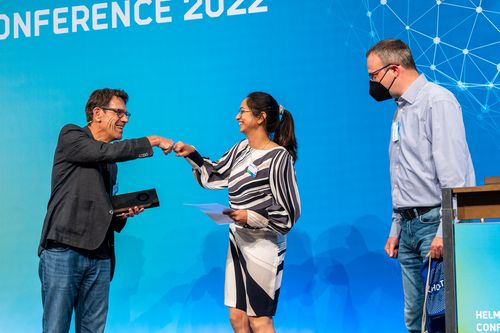