Laser-plasma acceleration is of central research interest in a large variety of domains of science, such as high energy density physics, radiobiology & -medicine as well as matter under extreme conditions. Connecting simulation data with experimental data is essential for a better understanding of laser-plasma acceleration to study processes at high spatiotemporal resolution. However, numerical simulations of complex systems are computationally very expensive meaning that high-fidelity simulation codes have to run on the largest high performance computing (HPC) systems in the world.  This high-fidelity, very time-consuming simulation code is then used for e.g. theory-guided analysis of experimental data or design space optimization of upcoming experiments.

Machine learning (ML)-based surrogate models promise a significant reduction in simulation time by learning the relationship between parameters and simulated systems. This means that a classic numerical simulation is basically replaced by a call to the corresponding surrogate model, neural network, with fast inference times. However, we must train such surrogate models on large data sets to guarantee robust predictions, which takes a long training time due to the large size of the training dataset. In addition, storing every time step of the simulation is memory-intensive, especially for high-fidelity simulations in the upcoming exascale era. Therefore, the training of the surrogate models has to be done at minimal input/output footprint. 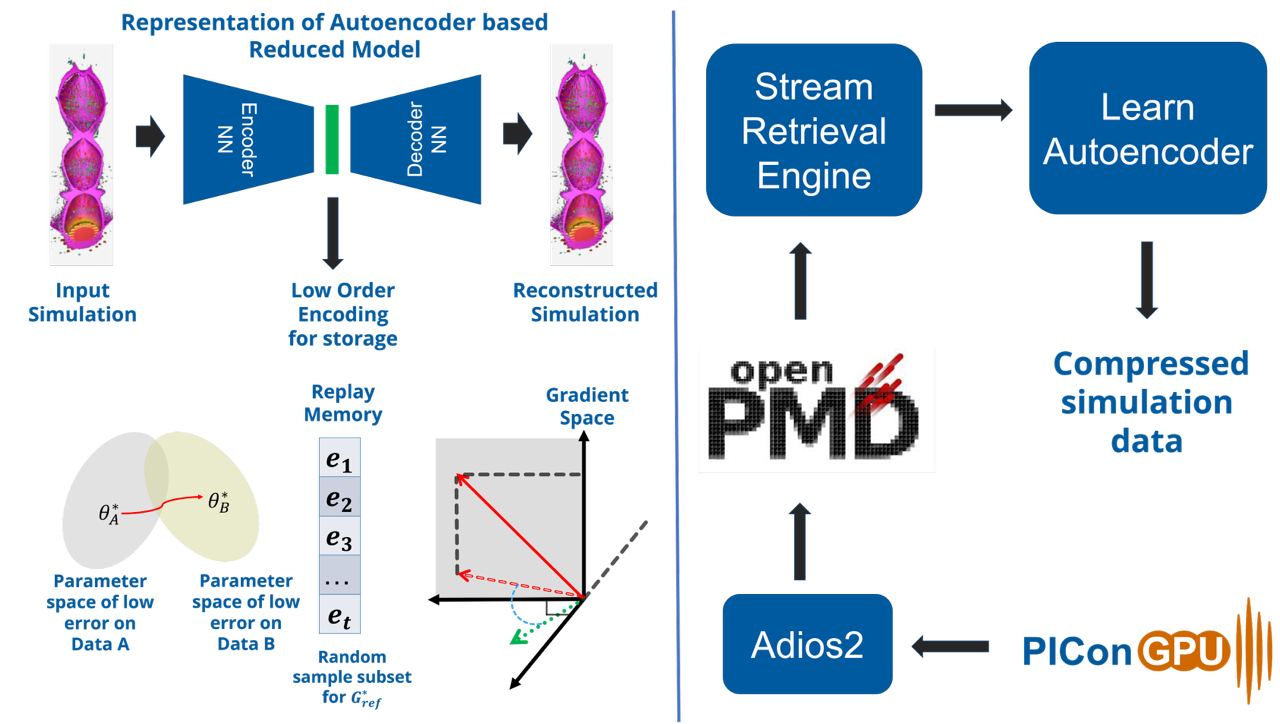 Figure: Representation of the autoencoder based model and streaming approach
presented by Patrick Stiller in his poster.

His poster presented an approach to train surrogate models via streaming. It became clear that stable training of the surrogate model can be done concurrently to running simulation code without storing training data on a disk by reformulating the training as a continual learning problem. The applicability of this approach to simulations of 3D Laser-wakefield acceleration was demonstrated by in-situ training of a 3D convolutional autoencoder that obtains training data from HZDR’s in-house particle-in-cell simulation code, PIConGPU, via openPMD’s ADIOS2 streaming backend.